Last weekend Fencing Center of Chicago hosted the first ROC & RJCC of the season. Lincoln Square Fencing had 5 of our athletes attend in 4 different events.

Saturday morning started off with Junior Men’s Saber with CJ and Evan competing in their first Junior event of the season. Due to the small event size, the competitors were put into one pool of 10. CJ emerged from the pool undefeated with 9 wins and an indicator of +24; Evan recorded 6 wins with an indicator of +6 to finish 4th out of pools! In the Elimination rounds both of our athletes ran into the same competitor, Matthew Jaworowski. Evan losing in the Round of 8 to him 8-15 and CJ losing to him in the next round, 11-15. Because it was a Junior Regional, both fencers  earned points towards Junior Olympic qualification. 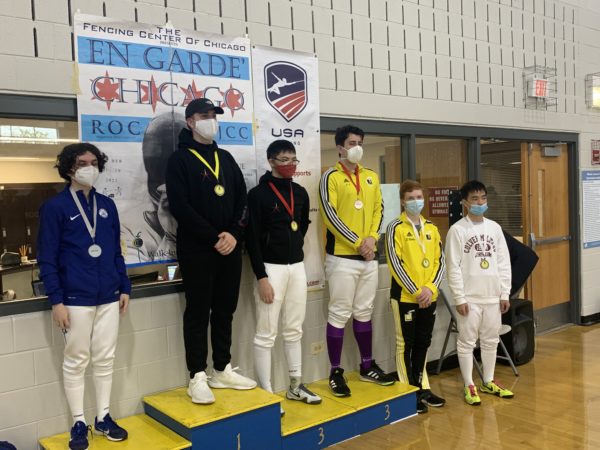 In the Men’s Division 2, it was again a pool of 10, with a couple of different faces. Division 2 is limited to a classification of C & Under. This time CJ won 7 bouts in the pool with an indicator of +18, and Evan picked up 6 wins with an indicator of +12. During the Direct Elimination rounds, Evan lost in the Round of  8 to David Naranjo, in tough fought bout, 13-15. CJ, meanwhile, cruised into the Semifinals with a 15-4 win and faced Matthew again. This time he picked up the win 15-10. In the Finals, he went against Jonathan Liu and clinched the Gold, 15-13! As this was an ROC, only the Top 40% earned points towards Summer Nationals qualification. That was the Top 4 in this event. 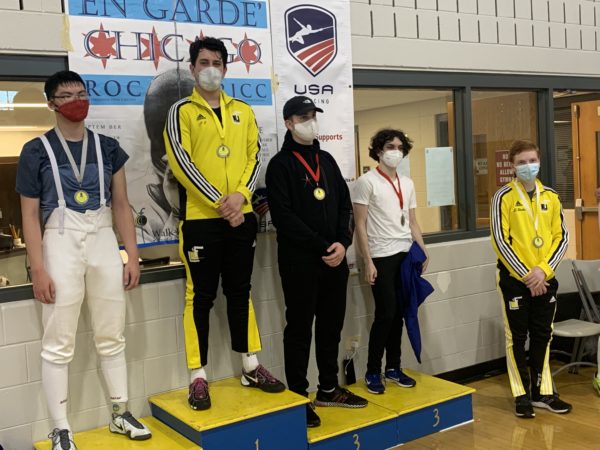 Looking at these two photos, you can see how tight the field in our region is for the Top 5 spots: it’s the same 5 athletes, just standing in slightly different spots from the morning to the afternoon.

In the Women’s Cadet, Genevieve returned to competition. Her family takes the summer off, so this was not only her first competition, also one of her few “fencing days” this Fall. Her event was half the size of the Men’s, unfortunately, and she competed valiantly, but was unable to secure a win in the pool. In her DE round, she lost 8-15 in the Round of 8. We are looking forward to more training and competition for her and ultimately to get back to where we left off last Spring.

We finished the competition on Sunday with the Cadet Men’s Saber. Theo and Oscar Brown represented LSF in that event. This was Oscar’s second competition, ever, and his first at the Cadet level. There were 13 in this event. In the pool round, Theo had 1 win and a -4 indicator while Oscar managed 2 wins and a -10 indicator. In the Elimination round, Theo’s pool result put against a strong fencer from Culver Academy and he fell, 9-15. Oscar’s first round opponent was a fencer from his pool. He was able to use the knowledge and turn it into a 15-14 win! His bout in the Round of 8 was against the #3 seed, Edward Han. In this bout, he was simply outclassed against a much more experienced fencer, 5-15. 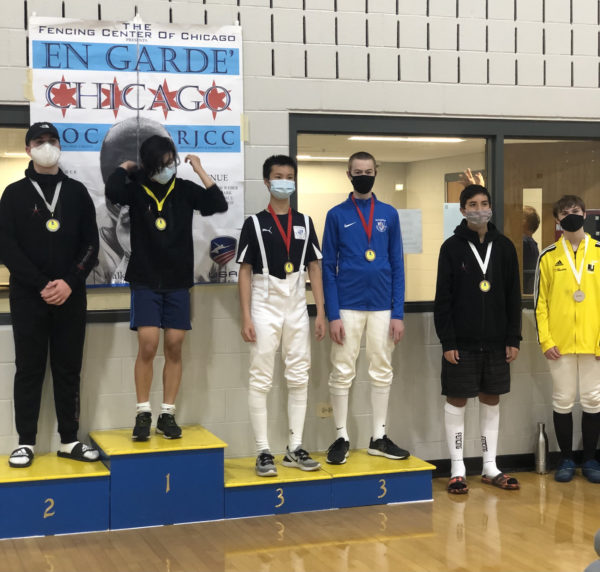 We look forward to more competitive successes from Oscar as he starts the journey of competitions in the region and beyond!

In these early season competitions, we go into them with certain goals. Sometimes the goal is to find our niche, sometimes to practice a specific action against new opponents. Sometimes the goal is simply to find out where we stand in a new age group and what we need to be good at to continue success from earlier ages. This event was definitely a practice tournament for all of us, and the coaches look forward to discussing in more detail with the athletes during lessons and practices about how we’re doing in advance of the next competition.

Full results can be found at Fencing Time Live.